February 18, 2020
They say, failure makes us stronger… Or maybe it makes us weaker, Maybe it just breaks us into pieces of hopelessness. The books we read, the interviews we watch, and the success stories we hear always suggest that failure is the passport to success. But, often unheard of, there are tonnes of cases in which dreams remain unfulfilled when a series of bad performances make people lose their love for what they were working on and were very passionate about since forever. Instead of forcing ourselves into the “Never Stop” arena, maybe we could sometimes just take a step back , recharge ourselves, think differently, see how we’ve evolved in our journey and then plan how we really want to work on that wall we could not break earlier. It is important to not lose sight of the reason that made us work so hard in the first place. If that reason still has power to keep the fire inside us alive, effort will flow effortlessly. If our “Why” doesn’t hold true anymore or if
Post a comment
Read more

What No One Tells You about Perseverance

May 18, 2019
It's tremendously important to keep your goals in mind as much as you can. Most New Year's resolutions fall by the wayside when people lose sight of their goals . The conscious brain is engaged when we think about goals. If your goal, for instance, is to stop eating sugared foods, you can't let yourself get so engrossed in other daily activities that you lose sight of your goal and wind up with a cookie in your mouth before you know it. This isn't easy to do. In a busy person's life, there are lots of competing demands for conscious attention.  You're not perfect. Your commitment and perseverance will not be perfect. You're going to have setbacks and stumbles in pursuing any goal you set. The important thing is not that you have these setbacks but how you react to them. Perseverance does not mean perfection. It's not often constant, unwavering adherence to a commitment. It is usually a series of quick course corrections when you get off trac
1 comment
Read more
June 01, 2016 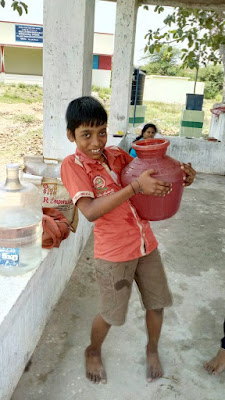 Chess Digest ( Vol 1 Issue 11) WORLD PRAGGNANANDHAA BECOMES YOUNGEST INTERNATIONAL MASTER EVER! Houston, we have an IM – and he is ten years and ten months of age!(Age at which children start thinking about their hobbies, this little master has set a world record) Better learn to pronounce this Indian's name: Praggnanandhaa, Pragg-na-nan-dhaa. The 9th KIIT International Chess Festival was held from May 23-30,2016 in Bhubaneswar,Orissa where Praggnanandhaa made his third IM norm, after norms in Cannes and Moscow. Pot-full of titles! SHAMKIR CHESS 2016 The “Shamkir Chess 2016” International chess tournament is dedicated to the memory of late Azerbaijani Grandmaster Vugar Gashimov. Held in Shamkir, Azerbaijan from May 25th to June 5th, 2016, the tournament is a 10 player round-robin with a total prize fund of €73,000 and €15,000 for first place. After five rounds of breathtaking chess, Grandmaster Caruana Fabiano is in the lead with 4.5/5 points. I
6 comments
Read more
May 21, 2016 Chess Digest ( Vol 1 Issue 10) WORLD VLADIMIR PUTIN OPENS CHESS SECTION IN SIRIUS CENTER IN SOCHI On May 10th a new Chess section has opened at the Sirius Educational Center in Sochi. The launch of the project was announced by Chairman of the Center’s Board of Trustees, the President of the Russian Federation Vladimir Putin, who wished the youngsters and teachers success in mastering the new programme, under which pupils gifted at chess from all around Russia will improve their skills. EUROPEAN INDIVIDUAL CHAMPIONSHIP 2016 Ivan Saric who was the sole leader after six rounds at the European Championship held in Gjakova,Kosovo from May 11-24,2016 suffered a setback in round seven and lost against Ernesto Inarkiev. After this win Inarkiev has 6/7 and shares the lead with top seed David Navara, who won a rook ending against Baadur Jobava. Half-a-point behind the leaders follows a group of six players with 5.5/7 each. DING LIREN WINS AGAINST WESLEY SO Di
2 comments
Read more
May 05, 2016 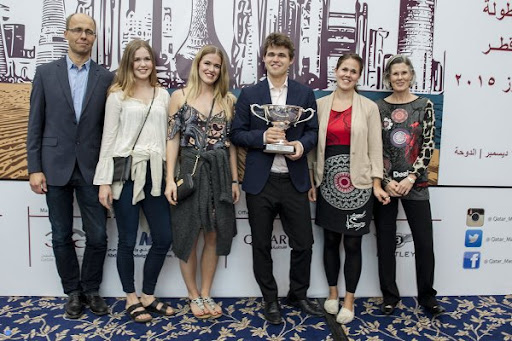 Chess Digest ( Vol 1 Issue 9) WORLD CARLSEN WINS NORWAY CHESS 2016 Current World Champion Magnus Carlsen won the Altibox Norway Chess Tournament 2016 held in Stavanger from April 18-30,2016.After seven rounds Magnus Carlsen looked almost certain to win the tournament, but then he lost against Levon Aronian in round eight, endangering his tournament win. But things went his way in round nine. Aronian drew against Pentala Harikrishna while Carlsen defeated Pavel Eljanov to win Norway Chess for the first time. A beaming Carlsen with his family(file photo). BATUMI FIDE WOMEN'S GRAND PRIX For a long time the players in the Women's Grand Prix in Batumi all snatched points from each other and the lead changed all the time. Until Valentina Gunina took countermeasures: She simply won all her games! In the second last round,she defeated Zhao Xue and jumped to 7.0/10, one-and-half points more than her closest rival, and thus won the tournament with one roun
1 comment
Read more
More posts